Don’t you feel like there should be more pie-related holidays? Sure, there’s National Pie Day, Pi Day, Thanksgiving, and Pule, but what about all those pie-less days in-between? So I’m declaring today a special day to eat pie. And tomorrow. And the day after that and so on. I just want to eat pie every day! I know, I may have a bit of a pie problem, but I feel better about myself when I think of all the other pie lovers out there. The first one that always comes to mind is Hugh Neutron. I know he’s a fictional character, but the two of us are kindred spirits. We like the finer things in life: pie, ducks, toast, cheese. All those sorts of things. I’m also a lot like Carl and Sheen too, so throw those three together and you get all sorts of weird. I’d love to say I’m a lot like Jimmy, but he’s too smart for me. However, I wouldn’t mind getting caught up in all of his scientific hijinks.

Jimmy couldn’t be a normal kid if he tried. (And he did. It didn’t turn out well. “Hey, have you guys seen my loopy dance?”) But I love him for that. He’s always doing something like unleashing an army of evil pants, starting a second Ice Age, or shrinking everyone in town. Each episode is just so fun that it’s next to impossible for me to settle on one favorite. Just like pie. I could make an alphabetical list of all the types of pie and I wouldn’t be able to pick the one I like the most. Well lucky for me, I don’t have to look too hard to find food and fun in this series. In “My Son, the Hamster”, Jimmy has a mishap with his teleportation pods and his atoms get mixed up with those of Carl’s hamster, Mr. Wuggles. Basically, their bodies switch, so Mr. Wuggles turns into a hamster boy (Furry Jimmy) and Jimmy, according to Sheen, becomes Hamster Lord. Yep, he’s got a cute, fuzzy hamster body with a big belly and little pawsies. I just love him! He’s so adorable/freaky and it’s so funny to watch him move around. And when his hamster sense takes over, he can’t resist the tempting smell of pecans, so he climbs up to his kitchen windowsill and dives right into a freshly baked pecan pie. That sweet smell is too much for me, so of course that would drive Hamster Jimmy nuts.

Unwrap dough and place on a lightly floured surface. Roll out dough anywhere from 12 to 14 inches across and place in a pie tin. Gently press dough into place. Trim excess dough or fold it back on itself.

Pour filling evenly into pie crust and bake until golden brown and the filling is set, 50-55 minutes. Remove pie from the oven and cool completely on a wire rack or on windowsill if that’s more your style. Serve and enjoy! 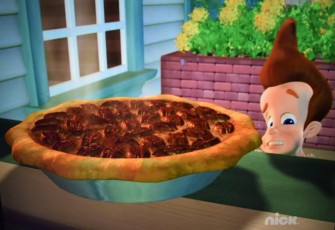 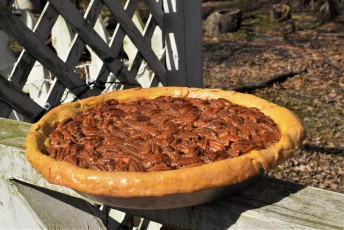 The human part of Jimmy loses control for just a little bit, but it’s still long enough to get him into trouble. At least he gets some sense knocked into him. With a broom. And even then he keeps munching on a pecan. I can’t blame Judy Neutron for freaking out over a vicious little rodent eating her pecan pie, even if it is her son. I’d hate for a beautiful pie like that to get ruined. Still, with all the (robot) dogs, brooms, and hawks out there, the world isn’t safe for hamsters or people with hamster bodies. But Jimmy’s smarts save the day and he and Mr. Wuggles return to normal. I just hope that Sheen doesn’t get his hands on Jimmy’s teleportation pods. The last thing Retroville needs is Lizard Lord and his Tongue of Doom.

I never dare sleep with my hands or feet dangling off my bed for fear of being grabbed by something under there. I know it’s silly. Why am I assuming that the monster under my bed is a bad one? My monster could be just like Mr. Bumpy. Sure, he’s a little rough around the edges, but he’s not bad at all. In fact, he really cares for The Boy. (He’s Mr. Bumpy’s hero.) And Mr. Bumpy is a great pal too. He does whatever he can for Squishington and Molly. He’d even give them the warts off his own back.

However, all friendships have limits and there are times when even the best of friends will fight. Squishington tries to repay Mr. Bumpy’s kindness for letting him stay under the bed, but he takes things a bit too far. (After seeing his nest cleaned and organized, Mr. Bumpy pinches his arm so hard it comes off.) And things only go from bad to worse when Squishington tries to feed Mr. Bumpy lunch. For a monster who craves dirty socks, used facial tissues, and the occasional clogged drain hair and toenail sundae, foods like lettuce, carrots, and celery aren’t very appetizing. When Mr. Bumpy runs for the filing cabinet to get some socks, Squishington tries to have him eat a slice of sweet potato pie. Instead of eating it though, Mr. Bumpy just pretends and tosses it on the floor. That doesn’t sit too well with Squishington. He feels his cleaning, cooking, and comforting aren’t being appreciated and after another fight, he says he never wants to see Mr. Bumpy again. I hate to see the bosomest of buddies fighting, especially over things like pillows, garbage, and pie.

Unwrap dough and place on a lightly floured surface. Roll out dough 14-16 inches across and place in a pie tin. Gently press dough into place. Trim excess dough or fold it back on itself. Crimp edge for a more decorative look.

Pour filling evenly into pie crust and bake for 1-1 ½ hours, or until skewer inserted in it comes out clean. Remove pie from the oven and cool completely on a wire rack. Refrigerate until ready to serve!

Variations: As soon as I saw the slice of sweet potato pie in Bump in the Night, I got all sorts of excited to make one. I came up with the recipe, made the pie, fell in love with it, AND THEN realized that it’s supposed to be good for you. Whoops! Although sweet potatoes are pretty healthy, loading them down with cream, sugar, and butter probably isn’t the best thing for you. (But Molly considers stray sock holes to be a part of a comforting and nutritious meal, so who knows?) Anyway, here are some tips to make a lighter version.
For a healthier pie crust: Replace half or all of the all-purpose flour with whole wheat (I’d use white whole wheat.) and you can omit the sugar.
For the pie: Reduce the granulated sugar to 1/4 cup or omit it all together. Feel free to use a sugar substitute or baking blend for the brown sugar. Reduce the butter to 3 tablespoons and replace the heavy cream with 3/4 cup of milk. 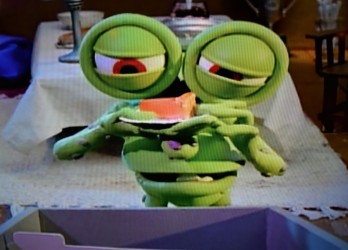 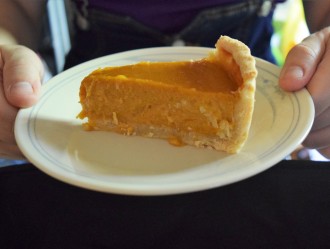 It doesn’t take long for Mr. Bumpy and Squishington to start missing each other and make up. (Causing the “Moral Alert” sign to hit Mr. Bumpy on the head.) I’m just glad to see those two getting along again. And I got a yummy sweet potato pie out of it too. Maybe I can make friends with my own monster by leaving some pie out for him or her. (I know Squishington likes eating pie in the dark.) Alright, time to fess up. Do I have a monster living under my bed? No, and I know for sure that I don’t have one in my bathroom. (Although one would so come in handy.) But my closet, that’s another story.