My sister brought home a very large can of baby corn the other day and we got all sorts of excited because we are baby corn junkies. We had big plans for that can. (Yes, those big plans really were to open the can and eat as much baby corn as we possibly could.) And no matter how many times we eat the stuff, we always bring up the same topics. My sister always says that she wants to see baby corn harvested and I always talk about how aggressive they are. Mmm hmm, baby corn. It’s a very aggressive vegetable. They’ve never done me any wrong, but that’s because I don’t give them the opportunity. I’ve watched the Very Aggressive Vegetables shorts on Nicktoons enough to know veggies’ true natures. Sure, they sit there all quiet and unassuming, but when some kid says or does something to offend those vegetables, the produce is ready to come at them!

Broccoli, Celery, A Not-So-Sweet Potato, Cucumber, and Zucchini are all pretty hostile, but the angry, little Baby Corn is what’s really stuck with me all these years. He can tolerate being stabbed, having his face rubbed in sauce, and getting splattered against a wall, but it’s when the baby corn’s taste is insulted that he takes action. And when you insult one’s taste, you’ve insulted all baby corn, so the aggressive baby corn calls for all his little baby corn friends to rise up and attack the bratty little girl. All they want is to be appreciated. I think I can do that.

Combine water and cornstarch in a small bowl and stir until the cornstarch has dissolved. Set aside.

Melt butter in a small saucepan over medium heat. Add the baby corn and salt and pepper. Gradually whisk in the water. Simmer, stirring frequently, until the sauce thickens and the baby corn is heated through, about 5 minutes.

Remove from heat and serve with unidentifiable green stuff/greens of your choice. Enjoy, or else! 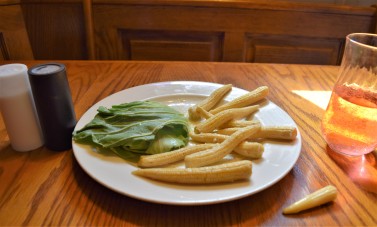 I don’t want to say that the little girl deserves the wrath of the baby corn, but come on, she deserves it. Yelling and throwing food just because it tastes off. And it’s just baby corn. It’s not like it’s…well I better not give an example. Who knows? Whatever I suggest may turn out to be quite aggressive as well. I don’t want to get anyone mad, so if there’s anything I’ve learned from these shorts, it’s to just sit here and eat all my vegetables.