Thanksgiving is kind of a big deal for my family because stuffing ourselves silly surrounded by our loved ones is essentially living the dream. And do you know what else (Who else actually.) is a big deal for my family? Winnie the Pooh. We’ve all fallen in love with that silly old bear and his friends. So writing about A Winnie the Pooh Thanksgiving just seems like a no brainer. Thanksgiving is a pretty important day in the Hundred Acre Wood too. It’s Pooh’s most favorite day of all. Most of the residents get together to share a feast and each one contributes something special to it. Pooh brings honey, Piglet haycorns, Gopher lemonade (52.6 gallons of it!), Owl biscuits, Eeyore thistles (Although he says no one will like them but him.), and Tigger brings hot chocolatey ice cream! It’s not the traditional Thanksgiving fare, but they’re happy with it. Then Rabbit shows up. He considers a Thanksgiving Day without turkey, cranberry dressing, the “once a year” plates, and pumpkin pie nothing more than a chilly Thursday. He then assigns duties and responsibilities to everyone in order to have a properly organized celebration. (Rabbit really expects Pooh and Piglet to catch a turkey?!)

My family does the standard turkey, cranberry sauce, and pumpkin pie thing, but that’s because we want them, not because we’d be celebrating wrong without them. Before Thanksgiving every year, each of my family members gets to choose one dish for our meal. Think of it like our own contributions, except only my mom, sister, and I do the cooking. (We’d prefer not to have Gophers in the kitchen.) What we eat is important to us, but we’re just thankful that we can eat together. Even a Hundred Acre Wood Thanksgiving would be fine by me. There’s nothing wrong with honey, haycorns, and hot chocolatey ice cream. (Leave it to Tigger to bring ice cream!) Actually, I think some hot chocolatey ice cream would be a perfect addition to my Thanksgiving feast. Pie shouldn’t have all the glory.

In a medium bowl, whisk the egg yolks until smooth. Gradually add the sugar and whisk until light and thickened. While constantly whisking, pour small amounts of the chocolate mixture into the egg yolks. Once 1/3 or so of the chocolate mixture has been added, pour in the rest of the chocolate mixture. Pour the new mixture back into the saucepan and place over low heat. Cook the mixture, stirring frequently, until it thickens and coats the back of a spoon and reaches 170 degrees F. Pour the mixture through a mesh strainer and into a bowl. Add the vanilla extract. Allow mixture to sit for at least 30 minutes to come to room temperature. You can set the bowl over an ice bath to cool the mixture quicker. Cover the bowl and place in the refrigerator until the mixture is fully chilled, 4 hours to overnight.

Pour the mixture in an ice cream maker and freeze according to the manufacturer’s instructions. Remove the ice cream and store in an airtight container in the freezer until fully hardened, about 4 hours. Enjoy! 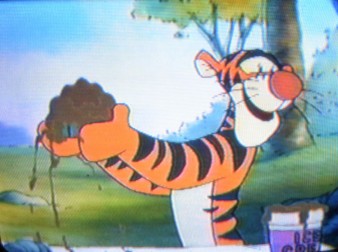 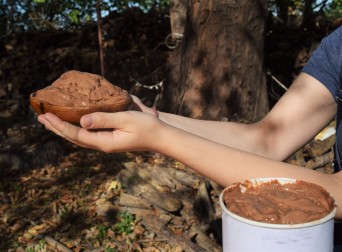 If hot chocolatey ice cream was the only thing to eat on Thanksgiving, I’d still have a very good day. (I’m about as obsessed with it as Tigger is.) But Rabbit believes that Thanksgiving is all about tradition and custom, habit and routine. He’s half right, but everyone has different traditions and can change them whenever they want. Turkey isn’t the most immensely important part of the holiday. And having enough food to calm the most ferocious of beasts is just a bonus. So if your food and decorations are ruined, you can’t just call off Thanksgiving and say there’s nothing to be thankful for. (I’m talking to you, Rabbit!) Don’t worry. Pooh helps Rabbit see the error in his ways once he rounds everyone up again to share Thanksgiving. Rabbit realizes that all he needs for Thanksgiving, or any other day, are the friends he has. That’s because Thanksgiving is truly about friends and family gathering together to give thanks for how things are and what they have. After all, the grandest thing we shall ever have is one another, or so it was said by a bear named Winnie the Pooh.

I’ll be taking a break next week.

Tune in next, next week for more Cartoon Cravings!