The month of June always gets me thinking about a certain Looney Tune. Oh, you know the one. Cartoon Network used to do a marathon in honor of the guy. What was that called? June Something. June Duck! No, that’s not right. (Who would want to watch something called June Duck?) Now I remember! It was June Bugs. I know, like I could ever forget June Bugs. Bugs Bunny is one of my favorite cartoon characters EVER, so a weekend of nothing but Bugs was kind of a big deal to me. Yeah, the days of June Bugs are long gone but that can’t stop me from celebrating the rabbit. I think it’s time for my own June Bugs marathon. I can see the drama, the music (Yeah, “see” the music.), the pageantry, the double and triple-takes, the action, and the romance now. But what I really need to be seeing is the food. Most of the time Bugs just eats plain old carrots or someone’s trying to eat Bugs, but there’s got to be something I can make. (It would be much easier if I did this after watching all the cartoons.) Well, I do have one idea.

While playing around online, I stumbled across some stuff about Bugs Bunny making a fruit salad on Elmer Fudd’s head. I wondered what cartoon that could possibly be in. I hit myself when I found out that it’s Rabbit of Seville. How did I not remember that? Rabbit of Seville was, is, and always will be my favorite Bugs Bunny cartoon. I could sit there and watch Bugs shave and beautify Elmer Fudd all day. (Is that weird?) Now where does the fruit salad come in? I’m getting there. You see, Elmer Fudd was chasing Bugs (Big surprise there.) and the chase leads to an amphitheater (The Hollywood Bowl) where The Barber of Seville is to be performed. Bugs runs in through an open stage door and Elmer follows and ends up on stage. Bugs opens the curtain and the orchestra starts playing. The next thing you know, Bugs “The Barber” scoops up Elmer and gives him quite the shave. The next time Elmer finds himself in the barber chair, Bugs massages Elmer’s head and then uses it as the perfect base for a fruit salad. He piles on some lettuce, a bunch of whole fruit, some carrots (This is Bugs Bunny we’re taking about here.), whipped cream (At least I hope it is.), and tops it all off with a cherry. Bugs shows his masterpiece to Elmer Fudd, but he doesn’t seem to like it too much and goes after Bugs with a razor.

This is a chance to get creative, so add any fruits or veggies that you see fit. Here’s what I used.

Bugs starts with a ring of cream but whipped cream melts away too quickly, (It was already sliding before I got a picture.) so I started with a bed of 4 lettuce leaves. Toss in an orange, a carrot, an apple and a lemon, and two carrots, an orange, and a plum/apple. Slice one carrot and add it. Toss the fruit salad. Mysterious white and dark stuff started showing up here so that’s why I added the nectarines (They were the palest produce I could find.) and the plums. Add a pineapple and an apple.

Okay, now here’s where it gets confusing and crazy. Bugs tosses on so much stuff so quickly and the fruits change to other ones in midair or in the stack. So just stack as much fruit as you want in whatever way suits you.

Then spray on some whipped cream. Place a cherry on top and there you have it! 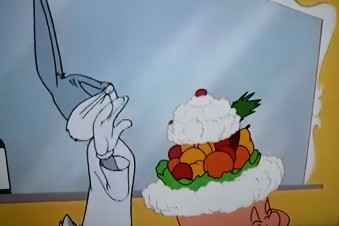 Ugh! You don’t know how badly I wanted to build this on someone’s head! (I did try.) But it’s hard enough to build it on a flat surface. You’d think that these “stacking recipes” would be easy, but gravity is a force to be reckoned with. So no, this is not a normal fruit salad, but Bugs Bunny isn’t a normal rabbit. And he’s definitely not a normal barber. If the fruit salad wasn’t enough to convince you, then maybe Bugs using hair restorer on Elmer Fudd’s face and using an itty bitty lawnmower to shave him might. That or Bugs using fertilizer and growing flowers on Elmer’s head. Yeah, he doesn’t like that too much either. This time he goes after Bugs with an axe. And then they have a weapons chase, and then they have a wedding, and then Bugs drops Elmer Fudd from really high up and he falls into a cake! And I just watched this cartoon five times in a row and I still can’t get tired of it. (I never will.) But if I plan on making it through all of Bugs’ cartoons in one busy weekend, I better move on. “Ehh…next?”