“Once upon a time there were three bears-Papa Bear, Mama Bear, and Baby Bear.” Okay, stop me if you’ve heard this one before. Yeah, it’s the story of “Goldilocks and the Three Bears,” but it’s probably not the one you’re thinking of. (Actually, I’m sure you’re thinking of the right one. You did read the title of this post after all.) So yeah, it’s the classic tale done up in good ol’ Merrie Melodies fashion. You know things aren’t going to go as expected right from the get-go when you see The Three Bears. This dysfunctional family is not the good-natured trio who just want to eat some porridge. They want to eat Goldilocks and are willing to go through the whole “Three Bears” routine just to get her. Now this is my kind of story, but there’s just one more thing needed to really jazz this up: Bugs Bunny.

The whole “Lure Goldilocks to the house and when she goes upstairs to sleep…WHAM! idea” is very spur of the moment, so the bears don’t even have porridge for her. All they have are some old carrots. That doesn’t stop Papa Bear and he tells Mama Bear to make carrot soup then. (You know where this is going.) The aroma of that nice, hot soup pulls Bugs from his hole and brings him straight to the bears’ table. Bugs isn’t one to pass up free carrot soup so he helps himself to it. And he knows the bears are there, but he just plays along. He’s got this whole situation under control, right?

I don’t even have all the stuff to make porridge in my kitchen right now, (I’m low on grains.) so I know where Mama Bear’s coming from. But she puts me in a tight spot when she says that they ONLY have some old carrots. So I’m going to say that she’s got a few extra things in the kitchen, like an old onion and some old stock, just to add some flavor.

Heat olive oil and melt butter in a large pot over medium heat. Add the onion and carrots and sauté until onion softens, 5 minutes.

Add the chicken broth, water, salt, and white pepper. (If you don’t want raw carrots for garnishes, toss them in the pot to soften them too. Otherwise boil them separately.) Bring to a boil and cover. Reduce heat and cook until the carrots are tender, 25-30 minutes.

Remove the whole carrots. Purée the soup with an immersion blender or purée the soup in a blender in batches. Return the soup to the pot over low heat. If the soup is too thick for your liking, add additional stock to achieve your desired consistency. Adjust the seasonings if needed.

Pour soup into bowls and garnish with carrots. Enjoy! 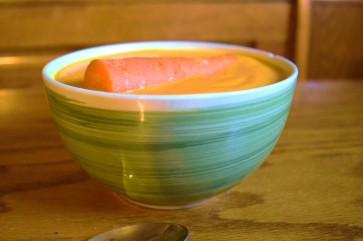 Bugs Bunny yells for some ketchup while he’s eating. (Which I tried with the soup and I’m not a fan.) He then lies on top of the bears and goes upstairs to sleep. He knows exactly what he’s doing and he’s going to outsmart the bears and end the cartoon a happy rabbit. Well, not this time. This is one of those cartoons where Bugs takes his games a little too far. He tells Mama Bear that she’s beautiful and lands one of his big Bugs Bunny kisses on her. Mama Bear becomes infatuated with him and he can’t shake her off. Even when he gets to his hole, she’s there. She covers him in kisses and he runs away screaming. I hope that carrot soup was worth it.