We’re well into the first week of the brand spanking New year! After reflecting on the year that’s passed, people feel the need to do something different with the New one they’ve been given. Some try to learn or do something New. Others adopt New rhythms by which they live their lives, or their patterns of behavior, or as it’s known in some circles, their Grooves.

See where I’m going with this? If things went Kuzco’s way, Pacha’s family would be evicted and Kuzco would be lazing away his days at Kuzcotopia. Doesn’t sound very Disney-esque, does it? But when things go hilariously wrong, we get the story we know and love. And it’s all thanks to that loveable oaf, Kronk. The guy can’t tell the difference between poison and extract of llama (In his defense, all of Yzma’s poisons look the same.) and he’s got some real issues with the devil and angel on his shoulders. One thing the guy’s got down, though, is cooking. That and speaking to tiny woodland creatures, but that has nothing to do with food. (I hope.) He can take over as a diner cook at the drop of a hat. And what about those spinach puffs?

¾ cup shredded, grated, or crumbled cheese; I used mozzarella, but feta or anything else is fine.

Heat olive oil in a small pan over medium-high heat. Add onions and cook until translucent. Add garlic and cook for 30 seconds. Set aside.

Squeeze out as much water as possible from the spinach. In a medium bowl, combine spinach, cream cheese, cheese, onion, and garlic. Season with salt and pepper. Add the egg and mix until well combined.

Unfold the sheet of puff pastry and cut into 12 squares. Slightly stretch each square or roll out with a rolling pin, so you have a little more pastry to work with. Divide the filling amongst the puff pastry squares. Shape the pastry around the filling. My method is to take a square and turn it so you’re looking at a diamond instead. Fold the point closest to you under the pastry enough so the front is a flat edge. Bring the two sides of the diamond together and pinch everything but the front together to close. Fold the back point of the pastry under itself enough so it has more of a straight or rounded edge. Repeat this with the rest of the squares and chill on a parchment-lined baking sheet for 30 minutes.

Preheat the oven to 400 degrees F.

Beat the egg and combine with water/milk to make an egg wash. Brush each puff with the egg wash and bake until they are puffed and golden brown, 20-25 minutes.

Move the spinach puffs to a wire rack to cool slightly. Serve and enjoy! 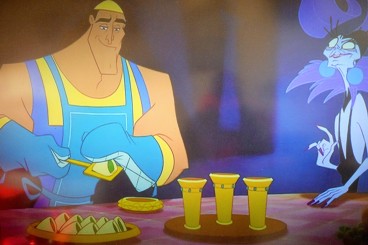 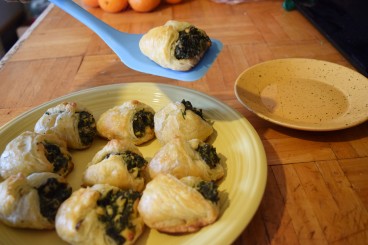 Yzma never liked Kronk’s spinach puffs, but she doesn’t count. Maybe she lost her sense of taste over her many many years. If Kuzco had gotten a chance to try them, he’d probably like them. Well, he wouldn’t like mine because of his whole, “Cheese, me no likey,” thing.

Cheese or no cheese, if Kronk spent a little less time focusing on these delectables and a little more on properly disposing of the emperor, Kuzco never would have to make that long walk back to the palace. Then he’d never realize that he was being heartless and selfish and there’s no point in being the hippest cat in creation if he has no friends. After all, a perfect world begins and ends with not just one person, but all of us if we do it right.