“I am the terror that flaps in the night. I am the scourge that pecks at your nightmares. I am Darkwing Duck!” Okay, I’m obviously not Darkwing Duck. (The scourge that pecks at your nightmares? How does he come up with this stuff?) But I can dream, can’t I? Just look at Launchpad. One day he’s the number one fan of St. Canard’s Caped Crusader, and then BAM! He becomes Darkwing’s sidekick and even gets to take on the role of hero himself.

Rightly so, because I can’t think of a better partner than Launchpad. He does a lot of silly things, but he means well. Not only is he a great pilot, (He’s gotten better about his crash landings.) but he makes a mean batch of brownies. And by “mean,” I’m saying these brownies will give you a nice kick in the taste buds. As far as Darkwing is concerned, these delicious devils pack enough heat to be used in place of hand grenades. Even Jambalaya Jake is wary of them. No one’s gotten anywhere by playing it safe, so let’s get dangerous!

¼-1 teaspoon cayenne pepper (How much heat can you handle?)

Preheat the oven to 350 degrees F.

Melt together butter and chocolate either in a double boiler/bowl over a pot of simmering water or in the microwave, stirring every 30 seconds. Set aside.

In a large mixing bowl, combine flour, unsweetened cocoa powder, baking powder, salt, and cayenne pepper. Using a stand mixer on medium speed, beat the eggs until fluffy, 2-3 minutes. On low speed, mix in the sugar, brown sugar, and vanilla. Add the chocolate/butter mixture and mix until fully incorporated. Slowly add the flour mixture and stir until well combined. Pour the batter into the prepared pan and spread evenly. Bake for 25-30 minutes or until a skewer comes out clean when the brownie is tested. Cool in pan for 10 minutes. Turn out brownie and allow to cool completely. Cut into about 25 pieces. Eat away! 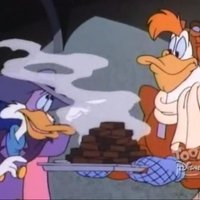 I can tell you that these brownies taste good, but I haven’t been able to test how they work as weapons. Every time I go to throw one, I end up eating it instead. I love these brownies as much as Launchpad and Gumbo do! And no, they don’t smell worse than beaver innards. Just take my word for it. The next time you’re out on an all-night crime-fighting spree, don’t forget to add some of these babies to your arsenal.