The first time I watched The Phantom Tollbooth was when I was in 6th Grade. We just covered the book (Or was it just excerpts?) by Norton Juster and were being treated to the movie. I can’t really remember much about the readings or watching the movie. (We also covered Where the Red Fern Grows, so I suppressed a lot of memories from that time.) I do know that I enjoyed them, but I don’t think I truly appreciated them. When I caught the movie floating around on my television years later, I thought I’d give it another go. Within seconds of the opening credits, I freaked out. “What? This is a Chuck Jones film! Look at who’s in this! They’re legends! How did I not notice any of this before?” And then I finished the film and freaked out again. “It’s so cleverly done! It’s beautiful! I can’t get these songs out of my head!” I was very ashamed of my younger self for not caring as much back then, but I guess I was in the school lull like Milo. I also had to discover a love of learning. (I never did learn to love school, though.) If I treated words and numbers like they are in The Phantom Tollbooth, maybe my education would’ve been a tad more enjoyable.

If I lived in the Kingdom of Wisdom, you’d probably find me in Dictionopolis. I just can’t help but love all the letters and words for sale. It’s so overwhelming that I’d probably try to use upholstery, flabbergast, and quagmire in the same sentence too. And I laugh when Milo starts making a speech at King Azaz’s banquet and it’s served to him as food. “I didn’t know I was going to have to eat my words.” Priceless! Now I’m serving up letters and such too, but they’re not from Milo’s plate. When Milo and Tock are thrown into the dungeon, they meet a Which. (Get it? Which? And her brother is a Whether Man! I love it!) The poor Which was wrongfully thrown in the dungeon after Princesses Rhyme and Reason left the land. Lucky for her, she’s got all the comforts of home in her cell and can pass the time by making up cookies! She offers the tastiest looking tray of punctuation marks and representations of King Azaz and the Mathemagician to Milo and Tock. It’s fun enough just seeing that, but I bet it’s even more fun eating them. I hear the the question marks are delicious!

Recipe makes about 20 chocolate shortbread cookies, depending on the size.

Sift and combine flour, cocoa powder, and salt in a medium bowl. In a stand mixer, cream together butter and powdered sugar until light and fluffy, 3 minutes. Reduce the speed to low and add the vanilla extract. Add the flour mixture a little at a time, and mix until combined. Remove the dough from the stand mixer and flatten into a disk. Wrap in plastic and chill for 30 minutes or until firm.

On a lightly floured surface, roll the dough out to a thickness of 1/4 an inch. Cut out shapes with any similar-looking cookie cutters or make stencils and cut out with a paring knife. Place the cookies on a parchment-lined baking sheet. For the cookies that have the details like extra marks and lines, now would be the time to carve those in. I also tried creating the details by making an extra tiny batch of dough using darker cocoa powder and pressing the darker dough onto the lighter one. Once you’ve used up all your dough, chill the cookies for 15 minutes.

Bake cookies until crisp and firm, about 20 minutes. Remove from the oven and let the cookies rest on the baking sheet for two minutes. Transfer the cookies to a cooling rack and let cool completely. Now would be the time to eat them! 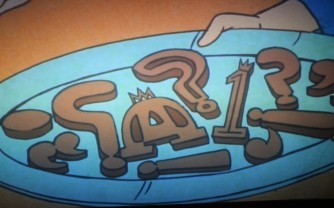 No wonder Tock snuck another one! Who knew that education could be so delicious? And making a batch of these is far from boring. Milo needed an adventure through a magical tollbooth to cure his boredom blues. All I need are some cookies!