Growing up near several farms, I’ve often passed by the animals and wondered, “What do they do when we’re not watching? Are they organized?” Turns out they are. At least chickens are if you believe everything that was shown in Chicken Run. (You never know.) Out there right now could be strong willed chickens, like Ginger, who dream of freedom from oppressive farmers and are concocting wild prison escape plans. And maybe someone has started selling pie machines to farmers too. Yeah, right. I’ll believe chickens can build a flying machine, but the pie machine is too far-fetched. (Even though pie machines are very real.)

It would be so nice to have a contraption like that. There have got to be hundreds of ways to make a chicken pie, so it gets confusing sometimes, but this machine takes out all the guesswork. I just want a little one for the average home cook, not a giant “wipe out the whole farm in one fell swoop” kind. (That gives me the willies.) You know, the last thing I want to see is any chicken being made into a pie. Actually, seeing Ginger and Rocky fighting to escape the pie machine is my favorite part, so I do enjoy them being turned into a pie. But I don’t want to see them eaten! Then again I do love chicken pies. (See the moral dilemma?) Well, be it chicken or apple, I don’t own a pie machine, so if I want a pie any time soon, I better get off my butt and make one.

Crust:
In a food processor, pulse flour and salt until combined. Add butter and pulse until mixture resembles coarse crumbs. Add 2-3 tablespoons of ice water, 1 tablespoon at a time, and pulse until dough just comes together when pressed. If the dough is too dry, add more ice water, 1 tablespoon at a time, and pulse again. Form dough into a ball and divide in half. Flatten each half into a disk and cover in plastic wrap. Let dough chill until firm, 30 minutes to an hour.

Filling:
Bring the chicken broth to a boil in a large saucepan over medium heat. Add carrots and potatoes and cook until tender, 8-10 minutes. Drain the vegetables into a colander over a bowl to reserve the cooking liquid. Set both vegetables and broth aside.

Heat olive oil in a large skillet over medium heat. Add chicken and season with salt and pepper. Cook for two minutes. Add mushrooms and continue to cook until the chicken begins to brown. Remove the chicken and mushrooms and set aside. Add onions and cook until translucent. Add garlic and cook for 30 seconds. Remove the onion and garlic and set aside. Melt butter in the skillet. Add flour and whisk constantly until a thick, smooth paste has formed. The roux is fine to use after a couple minutes, but if you want a little bit darker gravy, you’ll need to let your roux brown for at least 10-20 minutes, slowly whisking constantly. Once the roux has reached your desired color, whisk in the milk. Then gradually whisk in the reserved cooking liquid. Cook until the gravy is smooth and thick, still whisking. Season with salt and pepper, if desired. Remove from the heat. Combine the chicken and vegetables with the gravy and let sit while preparing the crust.

Unwrap one dough disk and place on a lightly floured surface. Roll out dough anywhere from 11 to 14 inches across and place in a pie tin. Gently press dough into place. Trim excess dough or fold it back on itself.

Unwrap the second dough disk and roll out similar to the first disk. Place the dough over the filling. Press both crusts together to seal. Trim excess dough or fold it back on itself. Crimp edge for a more decorative look. Cut small vents into the top of the pie to allow steam to escape. Make an egg wash by whisking the egg and milk together and brush the top of the pie. Bake for about 40 minutes, or until the crust is golden brown. If the edges of the crust are browning too quickly, place a thin strip of foil over them.

Remove the pie from the oven and allow it to sit for at least 10 minutes. Dig in! 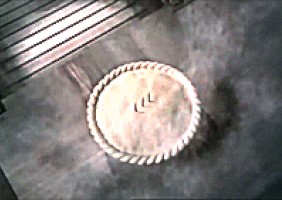 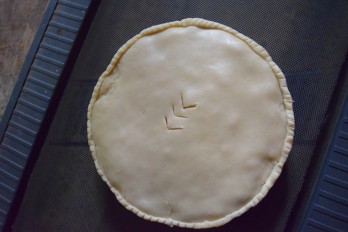 Mrs. Tweedy never did get her chicken pie business up and running, but I imagine that her pies would taste a little something like this. Hey, maybe I should start selling my own! Wait, no, not a good idea. I’d probably just eat my profits. (If I don’t eat all my product first.) I’m beginning to think that nothing good comes from starting a chicken pie business. I’d end up like poor, stupid Mr. Tweedy. Or even worse, up to my shoulders in gravy.