Just when I think I’ve watched every animated Halloween episode or special in existence, one more pops up out of nowhere. I’m actually quite happy about that because there really aren’t enough Halloween cartoons out there. The last special to catch my eye is Witch’s Night Out. It originally aired before my time, but I read that it used to be played on The Disney Channel back in the 80’s and 90’s. Let me tell you something. I was practically raised on that channel and I don’t remember seeing it even once. I wish I had watched it years ago because now I feel like I’m late to the Halloween Party. Well, better late than never.

The Witch is kind of in the same boat, even though the big Halloween party takes place in HER mansion. Hey, Goodly didn’t know anyone lived there. He was wary of the place anyway because he feared it was haunted. If he knew about the Witch, he’d never go anywhere near there. As for myself, I’d never throw a party anywhere without the witch. Hands down, the Witch (The Godmother) is my favorite character. She’s so dramatic and the faces and movements she makes are just priceless. If she wants to come to my house to grant me a Halloween wish, my window’s open. (I really don’t want her crashing through it and getting glass everywhere.) Anyway, back to the party. The adults want to make Halloween a meaningful experience, which I stand behind 100%. Kids have it pretty sweet being able to go trick-or-treating, but adults don’t have anything unless they plan it themselves. (It’s an insult to Halloween to say it’s just for children.) So Goodly and the others come up with the idea of having a big party, complete with a ton of guests and food. But maybe he shouldn’t have assigned food duty to Malicious. I can’t deny that she’s got some serious cooking skills. It’s just that her tastes are a bit funky, so she makes the most interesting party hors d’oeuvres. Sardine meringues, pepperoni peppermints, peanut butter corned beef balls, and chocolate gefilte fish all sound absolutely delicious, but nothing gets me more into the Halloween spirit than garlic taffy apples.

Thoroughly wash apples and dry completely. Insert the skewers down to the apple cores through the stem ends. Set aside.

Line a baking sheet with parchment paper or a silicone mat and spray with nonstick cooking spray.

In a saucepan, combine sugar, corn syrup, and water. Place over high heat and stir until sugar has dissolved. Attach a candy thermometer to the side of the pan and cook until the mixture reaches 230 degrees F. Reduce heat to medium and cook, without stirring, until the syrup mixture is golden. When the syrup reaches close to 300 degrees F, gently stir. Continue to cook until the syrup turns dark amber and closes in on 350 degrees F. Remove from the heat, stir, and let sit for a couple minutes. Gradually stir in heavy cream, butter, salt, garlic powder, and food coloring. The mixture will bubble, so be careful. Return the saucepan to the stove over low heat and stir until the butter is completely melted and the caramel is smooth. Remove from the heat and allow the caramel to cool to 200 degrees F.

Dip the apples, one at a time, into the caramel and swirl around so the apple is completely coated. Allow the excess caramel to drip back into the saucepan and move the apples to the baking sheet. The caramel will drip down the apple and form “feet.” If the caramel begins to stiffen before you’ve finished dipping apples, return the saucepan to the stove over low heat and warm until smooth again. Chill the apples until the caramel has fully set, 30-60 minutes. Now they’re ready to eat! 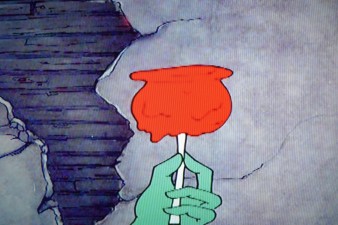 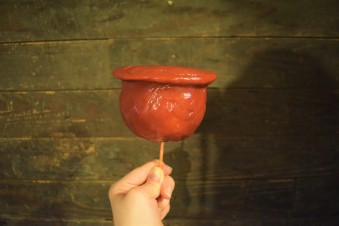 I just couldn’t resist trying garlic taffy apples, and since I’m a garlic lover, I’m actually really into these. They could easily have been a hit at the party. But no matter how well the party was going before the Witch and her monsters (Small, Tender, and Bazooey.) crashed it, it would never’ve become a true Halloween party without them. Not a single guest was in costume. (They think that dressing up is silly and immature, but it’s okay to form an angry mob and chase down monsters.) The Witch was kind enough to point out that every day we go about our lives the same old way, but Halloween is the one day a year we can pretend to be whoever or whatever we want. That may have been an eye opener for the townsfolk, but that’s old news to me. And with witch’s magic on your side, you don’t even have to pretend. I don’t have that luxury, so instead of just “poofing” into whatever I want to be for the night, I’m stuck wrestling with a wig and a dress.