Yes, you read that right. Snow cones. In January. Hey, this is the time of year for snow and ice, so I’m just using what’s on hand. And if your brain works like mine, when you think of snow cones, your thoughts immediately go to Monsters, Inc. (Which is one of the best Pixar movies ever!) Who’d of thought that monsters scare children because their screams are used to power everything? They just go to work and scare like it’s no big deal. Okay, well there’s one big deal. Scaring is considered dangerous work because monsters are afraid of the toxic kids. They believe that just one touch by a human child could kill them. (Actually, I think there’s a hint of truth in there. Kids are scary.) But I like Boo. She’s cute and harmless. Just like most of the monsters in Monstropolis. There’s no way they could scare me. Except for Mr. Waternoose. (*Shivers.* That guy’s icky.) Well, forget Mr. Waternoose. He’s not important. (Actually he’s very important, but I much more prefer Mike and Sulley.)

The stress of finding and hiding a human child and trying to safely send her home without being caught or tangled in a secret plot can be quite taxing on a friendship. Throw banishment on top of all that and Mike and Sulley are splitsville. I hate seeing them mad and hurt and I would just fast-forward through this part of the movie if not for the Abominable Snowman. When I’m not running around shouting, “Mike Wazowski!” or saying something like Roz, I’m yelling, “Welcome to the Himalayas!” I love the poor, messed up Yeti. He’d rather be referred to as the Adorable Snowman or the Agreeable Snowman and for good reason. Does a yak milk drinking, snow cone making monster sound abominable? And it’s awfully hospitable of the Yeti to offer Mike and Sulley snow cones, but the yellow color would concern anyone. (“No, no, no, don’t worry. It’s lemon.”) I’m pretty sure the Yeti, of all monsters, knows not to eat the yellow snow.

Zest of ½ a lemon

Combine sugar, lemon juice, and lemon zest in a small saucepan. Place over medium-high heat and stir until the sugar has dissolved. Once the syrup begins to boil, remove from heat. Pour the syrup through a fine mesh strainer into a small bowl. Let syrup cool completely and add yellow food coloring. 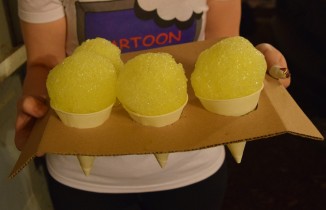 It seems like the Yeti’s not taking his banishment too badly. (At least he’s handling it better than Bigfoot, a.k.a. King Itchy.) Maybe the snow cones have something to do with it? He can’t escape the snow and ice, so it’s best just to have some fun with it. (He does think the snow is fabulous.) Hey, that’s not a bad idea. I think I just found my way to survive the winter. I’m going to need a lot more syrup.