With all the running around I’ve been doing lately, I’m starting to feel like Sonic the Hedgehog. I can’t beat feet like “The Fastest Thing Alive,” but throw me a Power Ring and let’s see what happens. But even if I had some extra juice power, there’s no way I can match Sonic’s attitude. He’s as arrogant as can be and goes around singing about himself. I love it! You know who doesn’t love it? That angry, evil Dr. Robotnik. He’s got all the makings of a classic villain: an army of Swat-bots, a pet robot bird to love on, and a nephew/lackey to yell at named Snively. You’d think he’d be able to take control of all of Mobius. Well he would if the Freedom Fighters weren’t around. They set Sonic SatAM apart from the other Sonics out there and I love the entire cast of characters. Among them there’s the strong-minded princess, the sweet, little kid, the smart mechanic, the kick-butt girl, and Antoine. Oh how I adore stupid, cowardly, little Antoine with his bad English and his intense love of French cuisine. (Poor preparation of dishes such as Crêpe Suzette and Escargot can and has been used as a form of torture for him.) And since Antoine is such a gourmet, you can already guess how he feels about chili dogs.

Sonic’s and Antoine’s personalities clash anyway, but things (Or should I say just Antoine.) get crazy when the two are forced to bunk together during a snow storm. When Sonic’s hut gets smashed by Dulcy, (Thanks to Antoine.) Sonic packs his socks and makes himself at home with Antoine. Thinking that he’s being a good roomie, Sonic decides to whip up some chili dogs for the two of them because you haven’t lived until you’ve had one of Sonic’s ol’ dogs. (Antoine was not thrilled.) Now Sonic means well, but chili dogs are a messy business and they’re even messier when Sonic’s the one holding the pans. He smacks a can of chili and sends the stuff bouncing all over the house and right into neat-freak Antoine’s face. When he gets upset about it, the oblivious Sonic just assures Antoine that he can have another helping. Antoine can’t handle that and just faints. Once he regains consciousness, Antoine sees that Sonic’s chili dog adventures have trashed his kitchen. Sonic only has chili dogs on his mind so the first thing he says to Antoine is that he saved him a dog. He then proceeds to eat it anyway. Antoine goes a little nuts and screams about chili dogs in his wardrobe.

Open the can of chili into a medium pan over medium heat. Cook the chili, stirring occasionally, until the chili is cooked through, about 5 minutes.

Heat 1 tablespoon vegetable oil in a skillet over medium heat. Add hotdogs to the pan and cook until browned and cooked through, turning occasionally.

Split a hotdog bun open and place a hotdog inside. Smother the whole thing with chili. Garnish with chopped onion and a green olive. Enjoy! 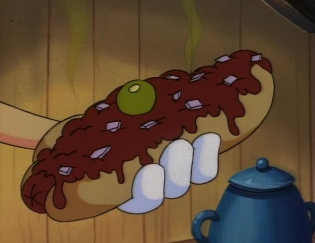 This recipe is a super simple one where you just throw things together, but that’s what makes it perfect for when you’re stuck over at someone’s house with a hankering for chili dogs. (Just try not to mess up the house so bad.) Making chili dogs away from home isn’t a common practice of mine, but I’m going to change that because they’re way past delicious! Uncle Chuck eats chili dogs and he’s been roboticized. But Antoine’s an odd one and isn’t a fan. The chili dogs aren’t enough to push Antoine over the edge, but they bring him right to it. Once Sonic starts sleeprunning, Antoine completely loses it and starts laughing maniacally and trashing his hut to the point that Sonic can’t stand him anymore and leaves. A tree even comes crashing down on his hut and he just goes on laughing. Poor little Antoine.