Whenever my parents would ask us kids where we’d like to go on vacation, we would always say Nowhere. And by that, we always meant Kansas. We didn’t actually want to vacation in Kansas, but creepy stuff supposedly happens there and we wanted to see it for ourselves. Our request was always shot down, but at least we could watch Courage and see the place through his eyes. Honestly, I’m a huge chicken and probably would’ve cried if I ever came face-to-face with King Ramses or Benton Tarantella. So thank you, Mom and Dad!

While I was safe on my couch, poor, little Courage had to deal with all kinds of horrors on his own. Be it a weremole or an abominable snowman or chickens from outer space. All for Muriel’s sake, but sometimes the scariest thing on the farm is Muriel herself. Like when she and Eustace become violent, thieving flan maniacs after being brainwashed by a Flantasy Flan commercial. The whole brainwashing bit doesn’t sound too bad for a marketing strategy, minus the whole violent, thieving part. “Buy Flantasy Flan.” Catchy. But the self-proclaimed King of Flan didn’t have to hypnotize anyone. Flan is delicious.

Preheat the oven to 350 degrees F.

Bring a large pot of water to a boil and place 5 six-ounce ramekins in a deep baking dish or roasting pan.

Add ½ cup of sugar to a saucepan on low heat. Without stirring the sugar, let it melt until it turns amber. Remove from heat and quickly pour caramel into each ramekin. Swirl each around to coat bottoms evenly.

Heat milk and ¼ cup of sugar in a saucepan over medium heat until mixture begins to bubble and steam, about 5 minutes. Do not let the mixture boil.

Whisk together eggs, salt, and remaining ½ cup of sugar in a large mixing bowl. Whisk a small amount (about a ladle) of milk mixture into eggs to temper them. Whisk in 2 to 3 more ladles, one at a time. Now add egg mixture back to the saucepan with the remaining milk mixture and whisk to combine. Strain custard through a sieve into a small bowl or liquid measuring cup. Add vanilla and a small amount of yellow food coloring.

Divide custard among the ramekins and add boiling water to the dish/pan until it reaches halfway up the sides of the ramekins. Bake for 45-50 minutes or until custard is set.

Remove the dish/pan from the oven and take ramekins out of the water bath. Let cool until room temperature. Chill for 4 hours. If you’re impatient, at least let them chill for 1 hour. When ready to eat, run a knife around the edge of the ramekin. Place a small plate over the ramekin and invert them. When you lift up the ramekin, the flan should be jiggly and covered in caramelly goodness. Grab a spoon and dig in! 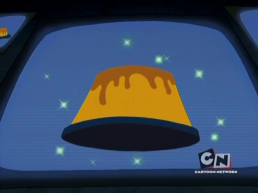 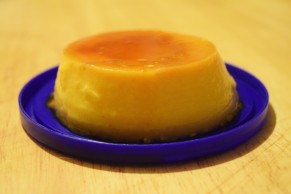 Oops! I’d much rather make my own flan than buy the pre-made stuff. Sorry, King of Flan. You lost one customer, along with all of Nowhere. Oh, well. That’s one less problem for Courage to deal with. That is, until someone or something comes lurking around that farmhouse.